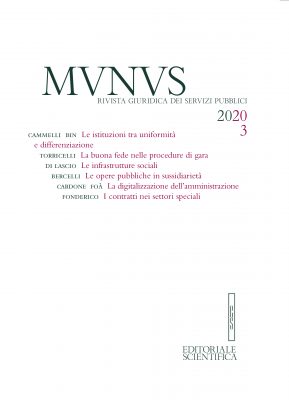 The difficult balance between the need for autonomy and the principle of unity (Article 5 of the Constitution) was set up by the constituent through the regulation of the relationship between state and regional laws. Today, the law has lost the centrality it had for the constituents and the balance lies primarily in the political relations between the leaders of the executive.

Ten years after the entry into force of Legislative Decree no. 104/2010, the full “civilization” of the administrative trial or, in other words, the harmonization to the civil one, cannot yet be considered completed – i.e. judgments based more on the pathological aspects of the procedure rather than on the mere illegality of the act. In fact, the dynamism of the notion “legitimate interest” perpetuates the specialty othe administrative trial, while the atypicality of the means of protection is not always ensured, notwithstanding its relevance for satisfying the requests of private persons. In addition to it, the focus on the reconstruction of the facts is insufficient and the implementation of judges’ official investigational powers raises some concerns. Last but not least, claims are not always fully satisfied by the administrative judgment. Therefore, the convergence between administrative and civil trials still remains a distant goal.

The purpose of the article is to investigate the basis and scope of the principle of good faith in public procurement, with a focus on its application to the clause providing for the exclusion of companies that have committed serious professional misconduct. The question arises as to whether there is an obligation on the company to make the public authority aware of the relevant facts for the assessment and, if so, how this obligation should be combined with the opposite obligation, for the contracting authority, to research for what she needs to know. The reference to good faith in civil law, which is usual in the most recent case law, requires the position of both parties to be reconstructed in terms of mutual solidarity. More generally, the idea that award procedures can be seen as forms of “negotiation” that must adhere to certain basic unifying principles implies accepting their equal and at the same time antagonistic dimension. The consequence is that obligations (including those of good faith) operate in a regime of reciprocity and in a perspective that is far from the idea of the subjection of one party to the other and of one interest to the other. In this perspective and with this caveat, the assimilation of public negotiations to private ones can effectively contribute to deformalize procedures, without ending up accentuating its special feature and without creating undesirable spaces of uncertainty and opportunities for litigation.

The paper deals with the relationship between infrastructure and economic development, focusing on the category of social infrastructure. Given the absence of a systematic legislative framework, the analysis considers some of the existing provisions to outline their contents and characteristics. Social infrastructures are examined in the context of the Italian administrative system, tackling the criticisms posed by the relationships between levels of government, by the implementation procedures, by the need of technical skills and, lastly, by the financing instruments, with specific reference to the sectors of school, health and social housing construction. The conclusions highlight the need to strengthen European and national policies aimed at the creation of social infrastructures, which should be supported by an adequate framework of legal rules, capable of guaranteeing certainty for investors but also, at the same time, of encouraging the flexibility of public choices.

The essay analyzes the institute provided by the current Code of Public Contracts for the realization, in subsidiarity, of public works aimed at the local interest. The analysis is of special interest for verifying “if” and “how” the principle of horizontal subsidiarity, dictated by art. 118 of the Constitution, can really and effectively operate in the field of public works for the benefit of local communities. The essay, after presenting the positive discipline envisaged for the institution, focuses on two elements. In the first place, to be analyzed is the collocation of the discipline in the Code of Public Contracts, highlighting its criticalities. Secondly, there is an in-depth study on the need for local legislation to be drawn up, with all the additional difficulties this entails.

The author focuses on the new phenomena related to the shared economy, analyzing their effects on the identity of historic centers and identifying possible solutions on the ground of landscape planning.

The paper firstly examines the evolution of the digitization process of the Public Administration highlighting the main issues in the implementation of ICT technologies. The first part addresses also what are the strategic objectives relating to digital transition of the Public Administration to be pursued using the funds granted under the Next Generation EU. Secondly, with the awareness of the importance of data in the digitization of the Administration, the characteristics of the different types of databases managed by the PA are therefore examined, together with the methods used to ensure interoperability between them, which allow the re-usability of open data and the sharing of other data held by the PA. Finally, in the perspective of further enhancing and exploiting the data assets of the Administrations, the aim is to verify whether the Administrations can sell at least some of the data that they hold for a market price.

This paper critically examines the main innovations brought by the Law Decree 16 July 2020 no. 76 (converted into Law 11 September 2020 no. 120) on the special procedural law of public contracts. The Author asks, first of all, how much the Law Decree no. 76/2020 is actually able to simplify and speed up disputesrelating to the procurement procedures referred to in Art. 120, paragraph1, of the Code of Administrative Trial and at what cost to the «due process». The Author also questions the actual innovative scope of some provisions of the Decree-Law no. 76/2020. According to the Author, the overall impression is that the legislator has balanced the greater protection afforded to enterprises, through provisions aimed at ensuring greater speed of the «procurement procedures», with measures for the protection of public authorities and interests underlying the contract (the reference is, in particular, to the extension of the scope of application of Art. 125 of the Code of Administrative Procedure laying down «…procedural provisions for disputes relating to strategic infrastructures»), inevitably limiting the effectiveness of the judicial protection.

The Court of Justice, in its Pegaso v Poste Tutela judgment, deepens for the first time the link between a public contract and the activities in the sectors covered by Directive 2014/25/EU. According to the preliminary ruling of the Court, a public contract is considered to be related to those sectors if it actually serves to adequately carry out the activity in them. Public contracts intended to cover several activities may also be relevant, provided that the main activity benefiting from them is in the sector covered by the Directive. Some narrower rulings of the national courts will have to be reconsidered. The Court of Justice did not rule on other questions raised by the referring court, linked to contrasting interpretations between the national administrative courts and the Corte di cassazione, regarding the nature of Poste Italiane as a “body governed by public law”. However, the judgment provides some guidance for addressing these issues in a different way.