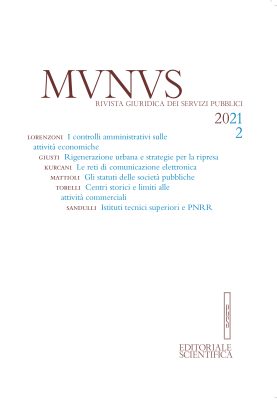 The essay questions the connections between the measures of administrative liberalization and those of simplification of controls on private activities by the p.a. The work focuses on some forms of replacement of prior authorisation with certification activities by the private party (such as the case of the Scia and self-certifications) and on the possibility for the public administration to target subsequent controls, according to principles of efficiency and effectiveness, planning them on the basis of pre-established, objective and measurable parameters.

This essay has two aims: outlining the scenario in which urban regeneration is considered as a tool for recovery and resilience of Italy and focusing the effort that is required to the Italian legislator in order to reach the goals set out in Mission No. 5 of the National Recovery and Resilience Plan (PNRR). For this purpose, this essay takes into consideration the initiatives undertaken by the Italian State, partially still in the de iure condendo situation, in order to verify if they are able to define the contribution that urban regeneration could offer to the new vision of urban planning as it is given both by the administrative jurisprudence and the constitutional one.

The research aims to address the problem of the delimitation of the Italian public administration’s boundaries. Given the lack of a legislation which sets out, in a uniform way, the conditions under the “public” character may be attributed to private entities pursuing public interests, there are many issues which concern the notion of public administration, of which the lowest common denominator is the recurrent crisis situations (economic and health). It is well known that the latter have put a strain on public administration’s resilience, effectiveness and efficiency. In particular, the relevance of the European legal system’s influence on the domestic one can be noted by the attribution to the Italian National Institute of Statistics of the task of identifying annually the entities that contribute to the budgetary balance and the sustainability of the public debt. Well, on one hand, the “public-private” dichotomy shouldn’t be considered obsolete and, on the other, the rationalisation of the administration in the private way plays an essential role in containing public spending. Therefore, a criterion for the attribution of public nature, based on the use of public resources and the assessment of the public character on a case-by-case basis, would allow to simplify the framework of the wider public sector, in the prism of flexibility and dynamism.

The essay aims to examine the legal regime of electronic communication networks, by reconstructing the developments that have taken place during the years and the features that characterize it.

The spread of digital technology has led to the emergence of new needs, making it necessary to introduce provisions and tools to pursue new objectives, which may at the same time present some implementation problems.

Technological progress, however, have also raised data and information security issues. The paper therefore analyzes the regulatory framework for cybersecurity, highlighting both its potential and critical issues.

The clause formulated in paragraph 2 of art. 10 of the TUSP, regarding the right of pre-emption, posed the problem of verifying whether and in what terms the public tender procedures are compatible with this kind of statutory clauses, which not only affect the free circulation of shareholdings, but actually prevent a competitive comparison. A first “combinatorial” interpretation led to the belief that the statutory pre-emption clauses are inapplicable. This interpretation is now contradicted by a recent opposite jurisprudential orientation – which considers the pre-emption clauses, whether proper or improper, valid –, that constitutes an opportunity to re-examine, after the adoption of legislative decree no. 175/2016, the theme of public intervention in economy.

The papers aims at examining the power executed by the Municipality to define a constrain in positive on the so called “historical places”, thus promoting the prosecution of specific trade and artisan activities which belong to the cultural tradition and represent an identity factor for the community. The main issues relating to such a solution are constitutional in nature considering that the obligation to continue a certain activity in a specific building may be in contrast with both the owner property right and the freedom of economic initiative.

Nevertheless, a different interpretation of art no. 52, c. 1-bis, d.lgs. n. 42/2004 is possible, in line with art. 9 of the Italian Constitution and the intangible cultural heritage. According to this interpretation, the Municipality, in agreement with the Superintendency, disposes of the legal tools to place stringent conditions on historical places, which substantially consent the continuation of a unique artisan activity.

The essay aims to analyse Nrrp measures in the field of education (Mission 4), with distinctive reference to those that impact on technological and scientific innovation. In particular, the article examines the measures related to the reform of the Technical Institute of Higher Education (Its) and analyses the most critical aspects of the draft law being examined by the Parliament. A relaunch of Its would significantly enrich Italian tertiary education, closing a gap with other major European countries.

The essay aims to analyse the Italian school, through the reforms of the education system provided by the Recovery and Resilience Plan. In particular, the contribution takes in account training and recruitment of teachers, school sizing, the School of Higher Education, the Higher Technical Institutes.