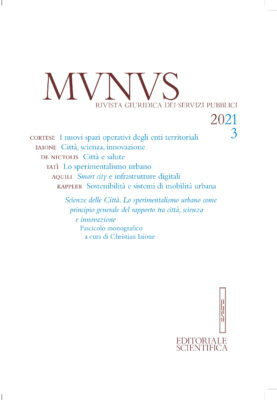 This article analyzes the relationship between cities, science, and innovation from a law and public policy perspective. The article opens by explaining the relevant European public policy framework on the relationship between cities, science, and innovation. The analysis leads to an emphasis on dimensions such as openness, accessibility, experimentalism, cooperation, and collaboration in knowledge production at the urban level, and the role of cognitive institutions as drivers of sustainable development and social justice in cities. The results of the analysis lead to codify a model of urban governance that recognizes the importance of multi-stakeholders in urban development processes based on knowledge production and especially on the service to the city role played by knowledge workers in urban contexts defined as engaged science. It also highlights the role scientific institutions can play both as real estate developers through, for example, the creation of science parks, campuses, and student residences, and as an engine of sustainable development through the animation of hubs for urban innovation set up in partnership between cognitive institutions and local governments as instruments of urban experimentation. Finally, the article identifies some administrative and urban policy tools functional to the functioning of this model such as the City Science Offices. It concludes by outlining a research path for further research activities on the relationship between science, innovation, and the city with an intergenerational responsibility perspective.

In 2017, the Italian Ministry of Health presented the “Rome Urban Health Declaration” which calls upon civil society actors and local administration as necessary to the efforts of providing a safe urban environment and increasing the inhabitants’ wellbeing. Global and EU urban policy agenda as well advocate for the involvement of civil society to achieve sustainable development. However, in the fight to COVID 19 pandemic, countries adopted a centralized approach, not integrating local actors in the definition of the recovery plans, exposing the communities to critical challenges. Starting from an overview of the role of cities in the Global Governance of Health (GHG) and examples, based on an earlier study, the paper will investigate innovative policies, governance arrangements and projects enabling multi-stakeholder sharing, co-management and collective ownership of urban health and health infrastructures. It will ultimately suggest leveraging on cities’ capabilities, their soft and hard legal power, diplomatic capacity as a possible solution to enhance global health security. However, in agreement with other scholars in the field, it’s argue that urban health co-governance could contribute to a broader definition of urban health, which is not limited to the protection against infectious diseases but includes access to a safe urban environment and different elements related to urban welfare.

The present article aims to discuss certain aspects of the public contract (so called “contratto ad oggetto pubblico”). The goal is to understand how this administrative category can represents a useful, and more pliable, instrument to support multi-level governance experimentation in the case of urban regeneration processes. The article begins by analyzing the “co-city” governance protocol, it then moves to the investigation of the public-private-community tenders’ model, as a new way to explore alternative urban governance mechanisms through the application of a «social pact».

In the chosen case-study of Impact Hub, the social enterprise is observed in its capacity to serve as a municipal incubator for innovative social and non-social startups and as a co-working. The research will attempt to show, first of all, how the tool can support the balance between territorial, economic and social goals in legal orders, through a sui generis dynamic “public-private” and “local-supranational”. Secondly, a kind of governance based on the collaborative paradigm will be envisaged. The city, as a public entity, is then able to face with new social challenges, involving at least four further actors: private, knowledge, social organized sector, and civic innovators. Thirdly, the case-study has a European relevance. In fact, three are the cities and the national legal systems compared on the base of the single tool selected.

Over time, a growing interest in cultural heritage has developed, becoming a new paradigm for research and an engine of sustainable, cultural, social and economic development. The focal importance that cultural heritage has assumed derives from the fact that it has been enhanced not only by the activities promoted by citizens and institutions but also by technological and organizational innovation, as in the new governance models of cultural activities. Once cultural heritage was considered an asset for few, today it has become a valid tool for the sustainable growth of local communities, thanks to citizens action declined according to new digital forms.

The contribution intends to investigate the relationship between the varied needs of cities and the changes in transport and mobility systems through the interpretation of environmental, economic, and social sustainability. The trends at European level that have led to the definition of common objectives and tools to enable new forms of urban mobility planning will be highlighted. The article underlines the transition from attention to the construction and sizing of new infrastructures to satisfy the demand for mobility to the innovative and intelligent regeneration and conversion of existing ones, symptomatic of a new approach centered on the needs of users and their ability to co-create. The social-collaborative approach will be crucial to foster sustainability, as it can allow the experimentation of mobility solutions and participation models in cities that become innovative living laboratories.

The article aims to deepen the concept of smart city, focusing mainly on the importance of the role of digital infrastructures and the need to eliminate the digital divide for the development of smartness in people. In fact, they are both fundamental aspects of a smart city. The essay examines the European and Italian regulations that promote the connection between the smart city and digital infrastructures, showing the relationship between the city and technological innovation. It suggests the legal instrument of public-private-community partnership for the implementation of projects concerning digital infrastructure in order to improve the smartness of the city and reduce disparities in access to telematic and information services. In support of this proposal, the paper proposes the case study of community Wi-Fi in the Municipality of Reggio Emilia, which exemplifies how technological innovation, scientific research and co-governance are key elements to sustainable urban development and resilience for future changes in the city.

Over the last decades, the housing sector has faced a huge crisis related to sustainability, accessibility and adaptation to climate change. More and more families, in fact, are in difficulty due to low incomes and too high rents, as well as a lack of affordable housing. The pre-existing difficulties have been worsened by the advent of SARS-CoV-2, a virus that has highlighted the importance of the “right to housing”. This article analyzes three different case studies in order to propose a new approach to housing and the city itself, based on the concept of “city as a commons”, a strategy of urban co-governance aimed at strengthening the dialogue between different urban actors, able to facilitate interventions of urban regeneration and redevelopment. Innovative procurement, technological and digital knowledge, as well as new methods of financing, are valuable elements that make up a toolkit of legal and economic solutions able to offer an effective and efficient response to urban discomfort.

Italian schools appear to be in critical conditions due to the poor management of the last decades. The difficulties in coordinating the various institutional actors involved in the management of the schools have shown inefficiency and ineffectiveness. For this reason, this article suggests to consider Italian schools as urban commons, whose governance is also extended to various territorial actors. It is thus proposed to rethink the subjects in charge of the construction and management of new schools in the form of a partnership-public-private-community at regional or provincial level (SPV) that can apply to innovative forms of financing, which fall within the definition of social impact finance.

The paper proposes a reflection on the relationship between the emerging Energy Communities (EC) and their potential commoning approaches considering energy production and distribution as urban commons. This means reflecting on the EC potential for democratisation and paying attention to the participatory dimension of citizens in a citizen science perspective. It also means questioning the governance of the urban commons to understand whether the implementation of new models can guarantee social justice and inclusion along with the production and distribution of energy. The authors analyse three different examples of EC adopting the framework of the City as a Commons, as an approach able to support communities in a collaborative transition towards a smart and just city in which the energy dimension can also be rethought in terms of citizen science. In the analysis, the features of what has been defined as a commons-oriented community science emerge and the paper closes with some reflections on the difficulties but also on possible policy recommendations for policy makers interested in enhancing the dissemination of EC according to commoning and co-governance approaches.

The COVID-19 Pandemic, originated in an urban agglomeration where the balance between nature and man has been broken, has shown its most serious effects in urban environments. Climate change clearly impacts the same contexts. Cities are often the places where great global challenges are most visible and where new solutions are imagined. For several years now, European local and centralized administrations have been wondering how to move towards a more sustainable city model, which promotes a better quality of life and is more reactive in relation to the challenges that characterize this environment. In this work it is illustrated a solution conceived to mitigate the effects of climate change in cities, that is, a wise reconnection between natural ecosystems and urban environments, through what are defined as green infrastructures. These will be briefly examined from a legal, legislative, political and practical point of view, to understand whether investing in this direction, leaving room for action and cooperation to local urban communities, can provide a concrete solution to rethink cities also in relation to the natural ecosystems that surround them.