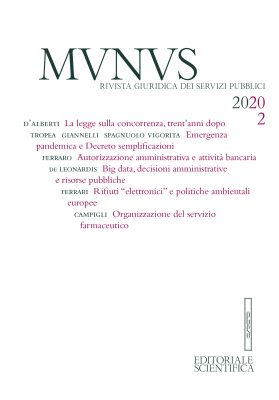 The Law no. 287/1990 has proved to be particularly valid and effective in its implementation in the last years, also considering the decisive contribution of the Italian Antitrust Authority (Agcm). Nevertheless, due to several reasons, there are still important limitations that hinder the realisation of a truly competitive market. First of all, the concept of the “competition” was unusual for the Italian Constitutional culture since the prevalence of catholic and socialist ideologies in the Constituent Assembly, compare to the Liberal ones. Secondly, a general law on competition is not sufficient, whereas an overall strategy is necessary in order to abolish the anti-competitive regulations. Moreover, the cultural background and the public opinion do not sufficiently appreciate the competition and the merit-based approach. In order to reverse the trend, a good starting could be that to promote the antitrust values in the public debate, explaining to citizens that the competition system is functional not only to protect the market but also their own rights.

The European Banking Union has deeply changed the content and the policy objectives of the sectoral regulation within the European legal system. The connected administrative system creates some new problems in the sector, concerning both the access to justice and the coordination between the relevant National and European rules. First of all, the paper proposes an assessment of these issues, starting from the current European and National legal frameworks on the authorization system to the banking activity’s exercise. Secondly, the paper aims to provide evidences in favor of the evolution of the European Law towards a new public approach for the banking sector, changing logical base and goals of the regulatory system. In this framework, administrative procedures play a key role. The Italian case shows that the adoption of the abovementioned authorization act provides an adequate protection for subjects whose interests are involved in the administrative procedure. Consequently, the latter, together with the adoption of the national decision, may indeed help to overcome some of the limits in judicial review generated by the new regulatory system and the case-law of the Court of Justice itself.

The recent Law Decree knowns as “semplificazioni” is placed, in matter of public procurement, in line of continuity with its predecessor, the so called Law Decree “sbloccacantieri”. In spite of this, many queries still remain between interpreters and practisers, not only with regard to the scope of individual rules, but also with reference to the conflict between the Italian and the European law, about specific rules dictated by the 2014 directives. With regard to the judicial review, the goals of speeding up the settlement of trials are pursued either by specific alternative dispute resolutios or by temporary, but still disruptive, options in favour of compensation for damages instead of the cancellation of the procedure.

The essay analyses the most recent and various legislative amendments which have devoted particular attention to simplification, giving priority to infrastructure sector:

starting from the so called Madia Law, up to the recent act on simplification encouraging digital administrative proceedings (Law decree, 2020, 76). In the context of a wider reflection on quality, efficiency and predictability of public decisions, whose lack represents a strong hurdle to economic development, the survey outlines how urgent is to achieve an effective governance and a set of training and professionalism models in order to overcome not only the current pandemic crisis, but also to better serve the increasingly need of a stronger administration in the role it plays in economic recovery. These goals can be achieved assuming as a matter of urgency an economic perspective that withstands a social one.

This paper focuses on the possible use of big data through artificial intelligence by the Italian administration. First of all, it is considered that the achievement of predictive analysis constitutes the result of two previous steps: “digitalization” and “data interconnection”. The article takes into account the primary regulatory provisions on the subject and the leading administrative case-law. The main sectors in which predictive analysis has been so far applied, especially abroad, are highlighted. The main advantages of the robotic decision making are mentioned (cost control, speed, impartiality, neutrality, certainty) as well as the critical points represented by opacity and relations with the protection of confidentiality. It is concluded that the ageing   of civil servants in Italy and the Italian habit of making reforms without providing for economic investments may slow down the development process of the use of big data through artificial intelligence by the Italian administration.

The essay reviews the regulation of waste from electrical and electronic equipment (Weee) in its historical development, as codified in legislative decree no. 49/2014, up to the latest recent revision contained in legislative decree no. 118/2020. The regulatory analysis is preceded by a presentation of the Weee phenomenon and its relevance in the environmental and economic fields based on the most recent international and national data. The article concludes with some observations about the impact of the Eu package on circular economy with respect to Weee and by making some considerations about the importance of the e-commerce phenomenon under the Weee regulation.

The pharmaceutical planning grid (“pianta organica”) is a restriction of private economic initiative, because of the quota system of market operators and the geographical distribution of pharmacies. Traditionally, limiting market access in this sector is justified by the need to protect health, ensuring a proper distribution of dispensing pharmacies throughout the national territory. Nevertheless, the origin of this administrative instrument is linked to outdated reasons of objective protection of public health, inconsistent with Constitutional subjective protection of individual health. Moreover, the pharmaceutical legislation seems connected with protectionist interests. Within this framework, the paper questions whether it is necessary to overcome or revise the pharmaceutical planning grid. The removal of limits to the number and to the territorial distribution of pharmacies, indeed, might provide a wider access to pharmaceutical products, without actual health risks, on the ground that the right to health could be interpreted as a driving force for competition rules.

The Constitutional Court dismissed the action brought by the Regional Administrative Court of Bolzano concerning the constitutional legitimacy of certain legal provisions of the Provincial Law of Bolzano no. 10 of 2018 that, qualifying as an authorisation the concession for the installation and operation of cableway installations for tourist-recreational use, exclude the possibility of tracing it back to the Public Procurement Code in breach of the principle of free competition.

Contrary to what the referring Court asserted, the Constitutional Court held that the Autonomous Province of Bolzano, whereas it has certainly regarded as a local public service the operation of cable car installations integrated into the provincial transport network linking permanently inhabited places, has not made a similar choice with regard to the facilities of cable cars for sports or leisure tourism, not integrated into the provincial public transport system. It follows that, only in the first case, where it gives management to third parties, the Province should use a public tender, simulating a fully competitive market, in order to avoid discrimination between economic operators and ensure the impartiality of choices. On the contrary, in the case of cableways for tourist-recreational purposes it must be applied the framework of the free private economic initiative that takes place in a competitive market pursuant to article 41 of the Constitution and that, in compliance with this Constitutional provision, may require a measure of authorization to carry out the work and then to its subsequent exercise, in order to protect the public interests involved.

The decision of the Constitutional Court in favour of the authorizing nature of the measure concerning the construction and exercise of cableways for tourist-recreational use appears a clear and important field option in favour of a precise way of understanding the relationship between the State and the market within the legal system, which enhances the freedom of private economic initiative guaranteed by article 41 of the Constitution, without annihilating the reasons of the competition that in the market find their natural expression, neither those of the public interests on which the activity can impact.