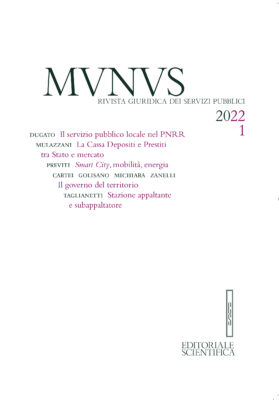 The Italian response to the pandemic – the Italian Recovery and Resilience Plan – does not constitute a tool for managing European funding or a spending project, but rather presents itself as a complex act of strategic and economic planning, which not only identifies objectives to be achieved, gaps to be filled, shortcomings to be corrected, but also outlines a path of public action to build a governance model of economic and social development. The State returns to being “The State” and regains its proper field of activity, in a legal order based on territorial autonomies. The national recovery and resilience planning, with its parallel economic planning, has the final goal to fight inequality, the latter considered as the obstacle to the homogeneous economic development in the country: cohesion, inclusion, innovation and sustainability therefore constitute the most effective path for reducing inequality. In this context, the local public services become the fundamental tools for correcting dysfunctions, fragility, and inequalities, with the effect that the administrative activity – on whose discipline the government is increasing its influence – will be evaluated more and more in terms of performances. This process will probably lead to a different approach also by the Court of Auditors and administrative judges in reviewing the work of public administrations.

This contribution aims at analyzing how the express provision of the in-house model as an ordinary management method in the highway sector can enhance the presence and role of companies controlled by regions and local authorities. This process of gradual but significant enhancement of the role of territorial autonomies in the management of motorway services through in-house companies can also find support in the growing role of independent regulation regarding the concessions market played by the sector specific administrative independent agency. Regions and local authorities have thus a central role in the direct management of highway services, and, in this way, a good amount of space is left for their development and economic competition needs, in accordance with the principles of subsidiarity, adequacy and differentiation pursuant to art. 118, par. 1 of the Constitution.

Within the process of the public administration reform, which interests also the economic sector, the Cassa depositi e prestiti S.p.A. (Cdp) is exemplary of the different phases of the history of the economy in the country. The history of this institution describes a complex relationship between the State and the market that is indeed less dichotomic and considerably more integrated. Cdp, as a public company with its own specific profile, should be considered as a “market unit” placed outside the limits of the State budget. In fact, it acts as a semi-public credit institution that owns postal savings and is also disbursing loans to local administration. In the last decades, it became a fully-fledged “holding” of public shares, as well as an efficient instrument of industrial and economic policy. Cdp is also playing the role of Instituto (o Banca) Nazionale di Promozione (Inp) and as such formally derogates from the general framework for banking institutions, being considered as a “non-banking credit institution”, and subject to the provisions applicable to financial intermediaries. Cdp, in this capacity, developed a prismatic vocation as a lender but also as a shareholder and institutional investor, widening considerably its operational capacity beyond the limits imposed by its statute. This last profile underlines some possible issues related to the operations of Cdp as being subjected to market rules but also pursuing the public interest. Experts and scholars have questioned the opportunity for Cdp to continue to operate with such a composite and generalist operational profile, instead of specializing and choosing to operate under a single profile more consistent with its institutional mission, as it seems to result in concrete from the last few years of activity.

The challenges of digital and ecological transition require responses and strategies involving all levels of government. The work aims at analyzing how the processes and measures related to the smart city paradigm can contribute to the achievement of the sustainable development and digitalisation goals that currently affect the urban area. In particular, after recalling the multilevel regulatory framework on the subject of smart cities, the survey highlights the benefits and the risks arising from the concrete implementation of the aforementioned model in the sectors of mobility and energy, also recalling some important initiatives recently undertaken in the national legal system.

Urban Regeneration is an expression contained in the Italian National Recovery and Resilience Plan and in a bill which is currently under examination in one of the two branches of the Italian Parliament (Senato della Repubblica). The subject is very controversial because the Italian Urban Law suffers the absence of an updated national discipline on the topic. The bill covers a very extensive set of contents and the most relevant of them are analysed and criticized in the article. The last part of the essay focuses on the future of the still in force Urban planning Law and its evolutions in the light of the urban regeneration processes.

The National Recovery and Resilience Plan, following the policies of recent decades, identifies the construction sector as the main driver for the recovery of the national economy. However, taking into account that the Plan should also promote the ecological transition of the country, it is necessary to verify whether the simplification measures and reforms envisaged are consistent with a policy declared as oriented to the principle of sustainable development. This paper will first examine the possible meanings of sustainable development in the field of spatial planning and the tools available to ensure equitable land use. Then the analysis will focus on the measures envisaged in the Recovery Plan, including the so called “superbonus”, the planned re-engineering of building procedures and the government’s commitment to adopt a new urban planning law.

In actual fact it is common to come across abandoned industrial warehouses converted by communities of foreigners (in the main) involved in Social Promotion Associations (Aps). Their scope is to carry out various kinds of activities including welfare and social integration, recreation, conferences and debates, language schools and collective prayer. These are effectively re-use (recycle) initiatives which, from a legal and regulatory point of view, can involve a number of legal disciplines. Amongst these: third sector law, urban planning law and constitutional law. When the initiatives are carried out by Islamic communities and the locations are also used for prayer, problematic disputes can arise, based on the well-known syndrome Nimby (Not In My Back Yard), whereby the above mentioned disciplines come into conflict. The paper then analyzes the phenomena in question aiming to restrict the field to aspects related more specifically to administrative law. In particular, everything is read and interpreted through the prism of Article 71 of the Third Sector Code (Legislative Decree 117/2017) and the exceptions (for example, to the regulations on destination use) provided for therein. A complex ministerial advice (or evaluation) addressing the issues in question is also critically commented. In the case of initiatives regarding the urban and construction sectors therefore, the paper shows how trend-setting organizations of the third sector are significantly linked and correlated with regeneration, urban planning and religion.

The paper results from a in-depth research about an interesting subject for the legal science, namely the one of “diritti edificatori” (building rights), through an approach in some ways interdisciplinary, that also involves issues relating to their still debated legal nature. In particular, the reasoning offers a reflection on the possibility to imagine a sort of “market” of these rights, functional to the spatial planning especially in the urban equalization field, even useful to the urban regeneration processes and for the goal to reduce land consumption.