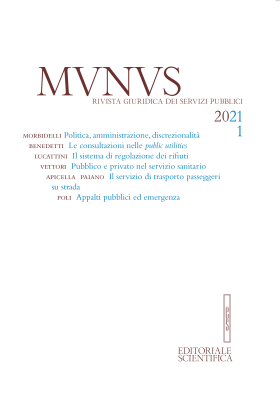 The essay, starting from the nature of the administrative “discretionality” as an independent variable in the Administrative Law system, intends to investigate some trends in progress around this theoretical element. In particular, the author focuses his attention on two opposite profiles: the first one concerns the factors that are determining an increase in the adoption of discretionality when administrative functions are exercised, while the second describes the elements that are causing the erosion of its action space. Then, starting from here, the paper intends to examine a third line of reasoning. Namely, the latter focuses on the exercise of discretionary powers by the political bodies, which determines the breakdown into two further sub-categories: one that can be found at the political level (i.e. in policy documents) and the other observable at the bureaucratic level. The effect is that, for the same kind of variable, two types of discretionality manifest phenotypes partly different. At the same time, the phenomenon appears to have the effect of increasing the extension of the judicial review.

The essay analyzes the procedures regarding quality standards and tariffs relating to certain essential services (electricity and gas, rail transport, electronic communications) in some European countries (Italy, France, United Kingdom, Spain). The aim is to investigate the dissemination of notice and comment participatory models, in order to investigate their common purposes and contents. The widespread adoption of public consultations makes it possible to carry out conclusive reflections on the relationship between public decision-making processes and the market, with specific reference to the regulation of independent authorities.

The essay analyzes the new regulatory system for the waste service enforced by the so called Arera, the Italian Regulatory Authority for Energy, Networks and Environment, attempting a preliminary balance of the “first hand” experience by the independent authority. The study sheds light on the impact of the new tariff method on existing contracts and on the complex multilevel governance, involving Arera, local authorities and local district’s regulators (the latter, so called enti di governo d’ambito). The national regulator has full powers for dealing with tariffs, but it can not force municipalities to give up their role. Nevertheless, since the start of the reform in 2018, Arerahas introduced innovations only gradually. The main goal of the metodo tariffario rifiuti (Mtr), namely the tariff regulation adopted for the first two years (2020-2021) and retrospectively for 2018-2019, is clearly a cost disclosure, on the assumption that previous regulation allowed unclear and opaque financial manouvres. The research shows how the new regulation of waste services has some differences with the British regulatory model, normally applied to network services.

The aim of the essay consists in exploring the use of private law in the outsourcing of public services. In particular, the author analyzes recent case law relating to the control of health services provided by accredited private clinics, in the execution of specific contracts with public health organizations. The legal issues at the attention of the judges has been whether the public healthcare organization is able to carry out the quality control of outsourced services by using contractual remedies or, on the contrary, whether it has to operate through administrative acts and powers. Taking into account the proposed thesis, the goal is to highlight how the use of contracts and private law tools can be useful to make the public regulation of outsourced public services more effective.

The paper explores the evolution and structure of the current regulatory framework regarding procurement procedures for public transport services. In particular, it analyzes the connection between national and European rules. It also explores the most recent jurisprudence on the subject. The aim is to understand whether the in-house providing model is an ordinary or exceptional way of managing the service, as well as to define the main administrative burdens that competent local authorities have to fulfill in the sector.

The use of Energy Performance Contracts (Epcs) for the energy requalification of public buildings and facilities has been promoted by the European Union to support both economic development and ecological and energetic transition. However, the difficulty in identifying the procedure to apply to Epcs (contract or partnership) has in fact hindered the use in the public sector due to the uncertainties on the distribution of risks and costs between public and private subjects. The legislator has clarified the regulatory framework with the decree Law No. 76/2020, providing for a special form of partnership in the case of Epcs. Even though the assignment of the Epc can take place through procurement or partnership, the application of one or the other scheme should take place on a case-by-case basis, having regard to the concrete content of the tender notice and contract.

This article is intended to lay down the interpretative guidelines of the current special regulations governing the procedures for the awarding of public contracts during the sanitary emergency. All things considered, the legislation has proved to be complex and difficult to be adequately interpreted, due to the competition/interference of several special regulatory regimes and the consequent problem of defining their respective ambit of application. This implies to look into the “state of health” of the current Public Procurement Code and its adequacy to meet the requirement of an effective simplification (intended both in a regulatory and administrative sense), especially in exceptional situations which require efficient intervention models and certainty of rules.

Why did the contact tracing app “Immuni” fail its goal of helping fight the Covid-19 pandemic? This paper highlights some possible reasons, starting with the role that the public administration played in promoting the app. In addition, it suggests a “restructuration” of “Immuni”, also by discussing some ways in which the administration could implement it, in the light of the recent legislative framework on digitalization.

The essay analyzes the issue of the legal status of non-State universities from the point of view of the recent rulings of the administrative judge. It starts from the presentation of the transformations that have taken place in recent years, then it points out how the rules of private law are fully compatible with the public law discipline of the university system, and finally, it focuses on the changes that could instead give rise to pathologies.  Following this path, the paper underlines the critical issues that may arise from the eligibility conditions of for-profit purposes in non-state universities, elements that could lead to the “marketization” of the entire university system.