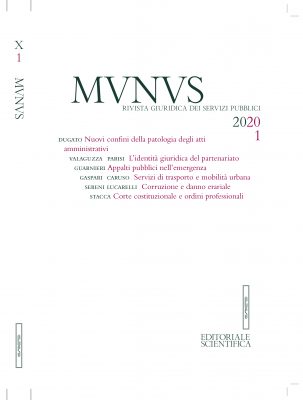 Against the background of the relationships between the domestic administrative law and the European legislation, as well as between the public and the private law, the essay analyses the topic of the administrative acts’ invalidity. Considering the autonomy of the administrative law (even on an historical perspective), the paper underlines the inconsistencies implied by the hybridization of branches of law; in this respect, the Author analyses in particular the nullity of the administrative act as regulated by a legislator too interested in creating parallelism with the private law. Furthermore, on the basis of the substantial value of the participation as well as of the strong link between the investigation phases of the proceeding and of the process, the Author focuses on the issues arisen from the art. no. 21-octies, par. 2, l. no. 241/1990, which relegates the participation to a secondary function.

After analyzing the norms of the Italian Public Contract Code regarding public private partnership, the Authors detect the essential juridical elements of the figure on the basis of a systematic analysis which considers the national and supranational contexts. Besides demonstrating the inefficiencies and incoherencies of the Code, the article proposes a definition of the concept able to be used in different normative frameworks, based on the expression «governing common interests».

The paper deals with sustainable urban mobility, in the light of the European Union Green Deal, as well as of some recent national experiences, and specifically those of Germany and Luxembourg. A critical review of the sustainable development model applied to the urban mobility sphere has been carried out, supporting its replacement with a new one, the latter having a different meaning of sustainable mobility. This approach is widely shared by scholars and institutions, given the current transport system costs, especially those social and environmental, specifically examined in this work. However, the new idea of sustainable mobility put forward in this study does not coincide with that of the mobility as a service, one of the core policies in the most recent EU agendas and strategies. Instead, it suggests the idea of a mobility whose legal status represents the necessary condition in satisfying fundamental rights and interests protected by the Constitution, such as the environment, health, safety, security and lives of persons (meant not as consumers and individual atoms, as recipients of a service, but as relational subjects).

Recent studies on non-scheduled modes of public transport have focused primarily on market access by non-professional operators (e.g. UberPop). The changes to l. 21/1992, introduced by l.d. 135/2018, as amended from l .12/2019, as well as the Constitutional Court’s ruling n. 56 of 2020, suggest a re-focus on the activity of traditional operators in the sector (i.e. taxi and car rental with driver, known as NCC). The 2019 reform, which follows the underlying approach of the framework law (l. 21/1992), primarily sought to strengthen the “territoriality” of the NCC’s service and its separation with that of taxis. To that end, despite the censorships of some legal arrangements around this choice which were considered unreasonable and disproportionate, it was nonetheless substantially endorsed by the Constitutional Court. It remains, therefore, an important matter deserving of further reflection.

The article deals with changes in the regulation of public procurement contracts after the Covid-19 pandemic. In the light of the difficulties in coordinating the emergency needs (simplification and acceleration of procedures) with the costs implied by the competition and by the maximum participation, the article focuses on the emergency regulation and on the resulting convergence of the domestic legislation towards the European one.

The purpose of this work is to carry out a survey on the discipline and the most recent guidelines on the subject of state-owned shore concessions for tourist-recreational purposes. The 2019 budget, by postponing the identification of the detailed regulations to a specific decree of the President of the Council of Ministers, ordered the extension by law of fifteen years of the existing concessions. The Council of State has already stigmatized this choice by the internal legislator and, at this stage, pending the much-desired Prime Ministerial decree, uncertainty reigns in the application. The imminent expiry of the existing concessions on the 31st of December 2020, by virtue of the previous extension, has brought the issue back to the center of the debate. With the relaunch decree, the Government approved a specific rule to reaffirm the validity and effectiveness of the extension pursuant to law established by law no. 145/2018. However, the uncertainties remain, despite the approval of the conversion law and the subsequent regulatory intervention contained in the august decree, pending the d.P.C.M. provided for by the 2019 budget, with the hope that the Italian government can give Europe the answers which the Community institutions have been asking our country for years.

The essay analyses, also through a historical reconstruction, the role and functions of the tools employed by the Public Administration (PA) to deal with their communication needs of, in the light of the recent reforms on transparency and the evolution of society and technology. Along these lines, the paper examines the opportunities and risks of the use of social media and the need to recruit people with new specific skills, also in order to create an effective system of access to (correct) information, improving the image of the PA and the relations between the administration and users.

The Constitutional Court judgment n. 259/2019 analyses the healthcare profession’s disciplinary power, resolving some issues related to it. Moving from the assumption that the activities of the professional orders, such as public agencies, can be attributable to the State legal system and are aimed at defending the correct exercise of the profession, the judgment specifically allows to exclude the corporative use of the disciplinary function from two distinct perspectives. From the regulatory viewpoint, it is possible to overcome the hypothesis of a material deontological limitation, since it must be placed within a much broader system of sources, which govern the professional’s conduct, which the deontological rule must duly face. From a sanctioning perspective, the disciplinary relevance of the deontological violation arises solely if it is not in contrast with the regulations of a higher order, while the disciplinary action per se must set its limits in the hypotheses in which the professional’s conduct is directly attributable to the professional activity.